We have changed our meeting space for the February meeting to Fort Garry Brewery.

We will more than likely hold the meeting in the warehouse to accommodate the club. The Malt Forward competition is still a go so bring your malty beverages to be judged by your peers. Group A, it is your turn to bring food to the meeting. See if you can bring food that would pair well with dark beer. 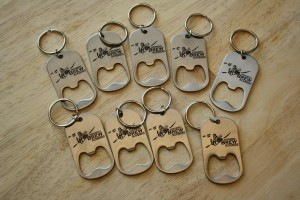 Our silver bottle openers are here and they are awesome.  We are selling them for $5.00 each and they will be available at our meetings.  Please help support the Winnipeg Brew Bombers. A special thanks goes out to Nathan Koop for doing all the leg work to get us these openers from LogoTags.

Tapsmagazine.com was gracious enough to donate a whole bunch of their December magazines to the Winnipeg Brew Bombers. In their January edition, they featured Winnipeg as a Premiere beer destination. We appreciate your efforts.

Half Pints Brewing Company is once again allowing us to brew a batch of wort on their Premises.  The date of the Big Brew is March 17th starting at about 9 AM (exact time to be confirmed later).

You must be a paid member in good standing.

You will be responsible for adding the yeast to your fermentor at home. You have free reign to use any yeast you want.

Due to a couple hiccups last year, we will check, clean, and sanitize your fermentors on site to make sure they will not pass on any bacteria to other carboys.

This year, we will give you the opportunity to vote for what beer style you want to brew.

Update: January 11, 2013 – Since we do not have 51 members of the Winnipeg Brew Bombers, it looks like someone(s)took into their hands to skew the results. As the president, I am making an executive decision:  “The Irish Red and the Wheat Beer are tied at 16 votes each and the winner of the Malt Forward competition in February will choose the beer style to be brewed.”